Written by George W. from Frogs Published on 15th Jun 2018

Lewandoski was the Bundesliga top scorer this season.He is the best player in the Bundesliga .His national team is Poland H . If they come in the top 2 they will play Tunisia,Belguim England or Panama . Think that Poland will get to the round of 16.

Poland  played a friendly a few days ago they drew against chile  2-2. Their starman Lewandoski got two screamers who currently plays for Bayern Munich . They wun the Bundesliga this season and last season .Poland are in group H of the World Cup I think  that Poland Will win their group the other teams in group H are japan Colombia and Senegal  His team mate krychowiack plays for West Brom and  they are joining Blackbun rovers in the EFL championship.

Written by George W. from Frogs Published on 8th Jun 2018

The Fifa World Cup is just round the corner, everyone around England is buzzing. A new game has come out as well dedicating the World Cup . I love playing the game I have Ronaldo and so does Oscar, all of my mates love playing the game .Our first game in the World Cup is against Tunisia on Monday 18 of June. Our next game is against Panama on Sunday 24 June , our last game is against Belgium on 28  June . If we come in the top two of our group we will play Columbia , Senegal , Japan or Poland , I think that England will get to the Quater-final of the World Cup, I think that Spain or Argentina will win the World Cup . Yesterday England played Costa Rica in a friendly at Elland  Road Rashford scored a screamer and Wellbeck wrapped it up for England with 15 minutes remaining. COME ON ENGLAND.

Written by George W. from Frogs Published on 29th Nov 2017

The Romans came to Britain nearly 2000 years ago and changed our country  even today evidence of the Romans being here  can be seen in the ruins of the Roman buildings forts ,roads , and baths can be found all over Britain . The Romans invaded other countries to such as  Europe , North Africa and the Middle East Rome is in the centre of Italy  one day before Christ was born the Romans came to Europe according to the Roman legend Romulus was the founder of Rome  Romulus and his twin brother Remus were sons of the god Mars when they were very young they were abandoned by the banks of the river timber and  left to fend for themselves luckily for them they were found by a she -wolf who took pity on then fed them with her milk the boys were later found by a shepherd who raised the boys grew up to be  strong and clever  and they decided to build a town on the spot where the shepherd had found them  they named their town Rome in August 55bc the Roman general ( julius ceaser ) invaded Britain he took with him two Roman legions after winning several battles against the Celtic tribes  in south east England he returned to France the following summer 54bc ceaser came to Britain again  landing at Walmer  near deal in Kent  this time he brought with him 2000 cavalry men and 5leigons .

The romans lived in Rome in the centre of Italy .The Romans came to Britain nearly 2000 years ago ! and invaded Britain twice

The Romans also invaded other countries to. The roman empire covered a lot of Britain and the middle east .one day some years before christ was born the romans started to come to britain . acording  to roman legend romulus was the founder of rome .romulus and his twin brother remus were the sons of mars . in August 55 BC they first invaded Britain then the following year they invaded Britain again 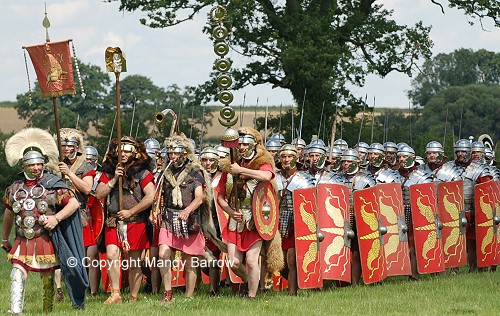