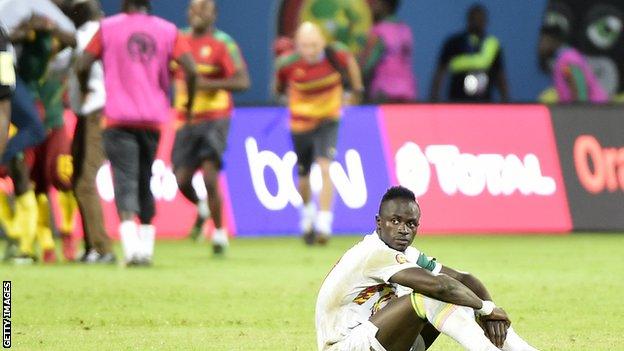 In the Africa Cup of Nations quarter-final between Senegal and Cameroon, the penalty shootout was level at 4-4 with every player having scored until Sadio Mane, then Africa's most expensive player, fluffed his lines.

Mane's wry smile turned to a heaving torrent of tears as Vincent Aboubakar, with the very next kick, drove into the roof of the net to knock out the Senegalese, many people's favourites.

The forward crumpled to the floor before being dragged away by two colleagues, national coach Aliou Cisse among them, with Mane's head so firmly bowed he could only see his feet and the ground beneath them.

This year, he was one of just two Africans to make the Ballon d'Or shortlist, alongside Gabon's Pierre-Emerick Aubameyang, while only Samuel Eto'o has featured in Fifa's top three in the last two decades.

"When he goes to the World Cup and shows what he can do on the pitch, he can win the Ballon d'Or next year," added Diouf. "He has the world at his feet."

It's not just the goals, the assists, the rapier pace but so often the weight of pass from Mane that impresses, while he also shows admirable desire to do his defensive duties too.

Whether he can fulfil Diouf's prophecy or not, the sense is that the flying forward has every chance of becoming one of Africa's greatest ever footballers.

Hope your team does well.

I have been teaching for what seems like years. There have been many changes in those years and I have a lot of sympathy for all those old dogs you hear about.